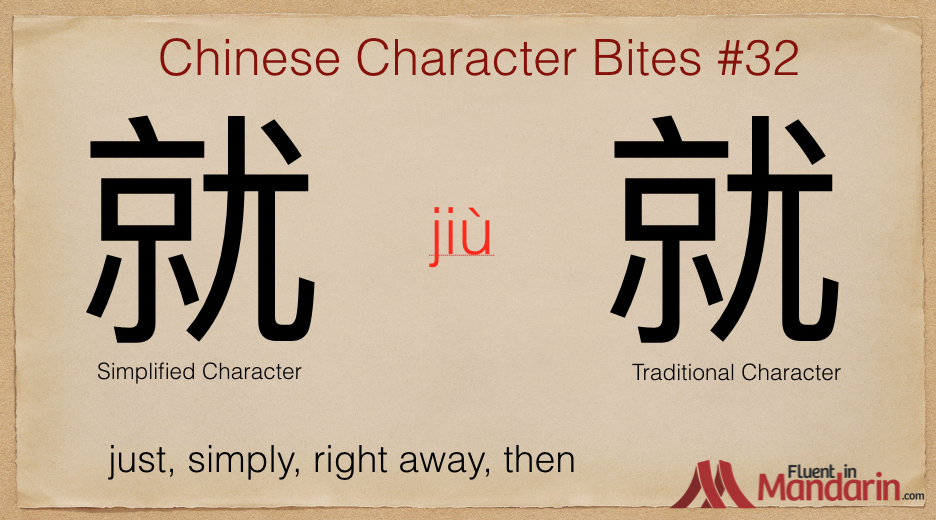 Our character for today is 就

This character is pronounced jiù in the 4th tone.

就 is used in a number of different ways. It can be translated as  ‘just / simply / right away / then’ depending on the context, and it’s best to understand the different ways it is used instead of just learning one translation.

It is an important grammar character in Chinese, but it can take time and a lot of examples to understand it properly, so if you don’t get it straight away then don’t worry about it!

Let me explain the main uses:

a) It can be used to emphasise earliness, suddenness or surprise about something happening in a short space of time. For example 你怎么这么早就来了 (Why have you come so early?) 我6点钟就吃早饭 (I eat breakfast as early as 6am)

b)  It can be used to mean ‘just have something‘. For example 我就一个手机 (I only have one mobile phone).

c) It can be used with 如果 ‘if’, to start the second part of the sentence. In this usage it can sometimes be translated as ‘then’. For example, 如果你要来，你就告诉我 (If you are going to come, then tell me).

d) It can be used in front of a verb, usually 是, to add emphasis. For example 我就是想跟你结婚 (I just want to marry you).

e) It can be used with 一 to mean ‘as soon as’. For example, 我一看到你，就特别高兴 (As soon as I see you, I feel especially happy).

f) 就是 can also be use to add emphasis to nouns or adjectives, or on it’s own to mean ‘Yes, exactly’. For example 她就是很漂亮 (She is very beautiful).

And there are a couple of other smaller uses too, but it’s best to learn about them as you come across them.

In some situations 就 will need to be translated, and sometimes you don’t need to translate it.