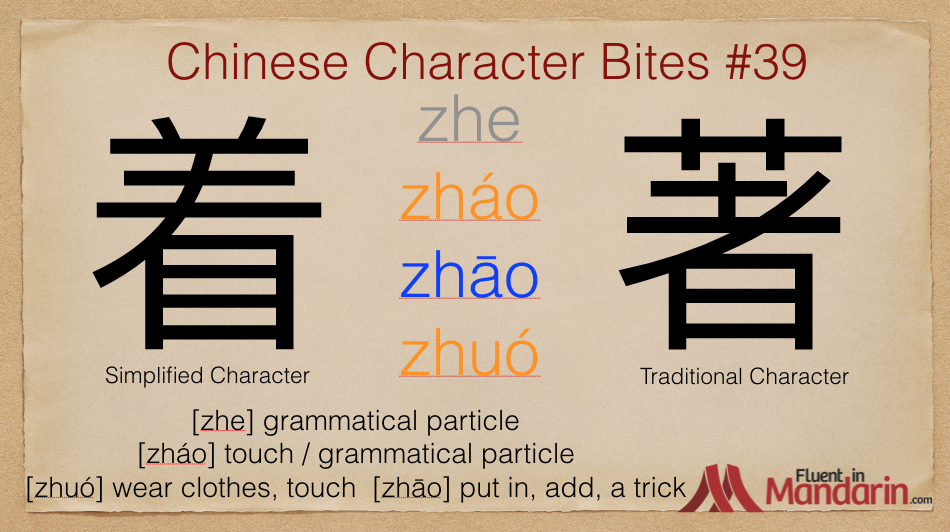 Our character for today is 着

This character is often pronounced zhe in a neutral tone, but it can also have the pronunciations zháo, zhuó and zhāo (see below).

It’s best to learn the first meaning ‘zhe’ first and then just be aware that it has other meanings as well, and learn them as you come across them.

Most of time that you will see this character, it is pronounced zhe in a flat tone, and it’s something like putting -ing on the end of a word in English, like 躺着 (lying down).

Pronounced zháo it can mean ‘to touch/ come into contact with, like in 着凉 zháoliáng ‘catch a cold’ and it can also be a grammar word, indicating the result of a verb.

Pronounced zhuó it can mean ‘to wear clothes’, as in 穿着 chuānzhuó ‘way of dressing’, and 着陆 zhuólù means ‘to land’ when you’re talking about a plane.

It can also be pronounced zhāo and mean ‘a move in martial arts’ or ‘a chess move.

And just to add to all of these, the traditional character version, 著, does also exist in simplified Chinese characters, when it is pronounced zhù and is a rarer character with a couple of different meanings, such as ‘book’ in 四大名著 (the Four Classic Novels of Ancient China)

I realise this is probably quite confusing, and might not make sense right now, so don’t be put off! This character does come up a lot in the first and second pronunciations, and it is an important one to learn!

着 and 著 were two different ways of writing the same character in the past, but the origin of the character is not clear.

The traditional character is 艹 (grass) + 者 on the bottom.