Pronunciation is one of the aspects of Mandarin Chinese that many beginners find challenging. That’s why I’ve put together a full video course called Break Through Chinese Pronunciation, divided up into easy to digest parts.

It will help you master all aspects of Chinese pronunciation and the four (+1) tones.

Step 1: Learn about Pinyin and the four tones

If you’re completely new to Chinese and you don’t know about Pinyin or the four tones, then watch this video, and I’ll explain them to you.

To make the differences between the four tones even clearer (normally you just have the tone marks on top of the letters) I’ve colour coded them as follows: 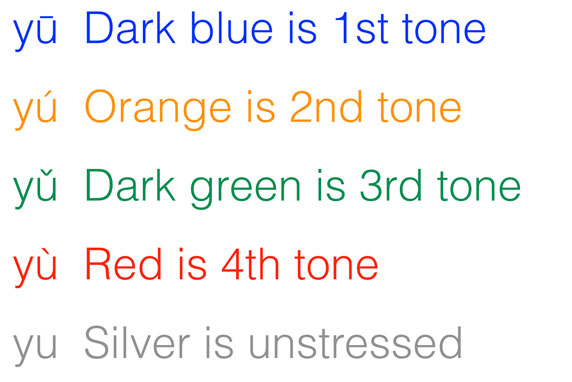 And to make things easy for you, I’ve used this same colour scheme for all my videos about pronunciation below.

Step 2: Focus on the sounds that are difficult to pronounce or are not pronounced like English

Pinyin is a great thing, because it gives learners a pronunciation guide for the sounds in Mandarin Chinese that is based on the Roman alphabet (the one I’m using to type this).

The problem, though, is you can’t just read the sounds exactly as if they were English words…

There are quite a few sounds which are not pronounced quite like you might think, and it’s worth practising them in a bit more detail, so you can get pronounce them accurately and avoid being misunderstood.

Each video below is just a few minutes long, so you can take things at your own pace.

Part 2: The difference between -uo and -ou

Part 3: The -e sound in Pinyin

Part 12: Sounds ending with -in

There are also a few sounds in Chinese that don’t exist in English, especially the Mandarin ‘r’, ‘q’, ‘x’, ‘j’ and some of the ‘i’ sounds. They are ones that you’re going to have to pay special attention to.

I’ve broken down exactly how to pronounce these sounds, and what you need to do with your lips and tongue, so you can practise them.

Step 3: Practise pronouncing the tones in the different combinations to get really used to the rhythm of all the different patterns

Once you are familiar with the sounds of the language and you know about the four tones, then it’s time to focus in on the tones and practise them specifically.

The best way to do this is to practise the tones in pairs, and I’ve made videos of all the possible combinations (don’t worry, with only 4+1 tones, there aren’t too many of them) so you can practise them.

Just repeat after all the examples in the video so you get the hang of the rhythm of all the tone patterns.

That way they will become much easier to produce and recognise.

The Ultimate Video Resource For Practising the Four Tones in Chinese

Step 3: Learn to recognise the four tones in words and sentences

Being able to pick out the four tones in words and sentences is really a very different skill to being able to pronounce them, and it takes quite a lot of practice.

I’ve produced a resource here to help you get that practice:

Step 4: Understand how tones work in speech and full sentences

A lot of learners get quite good at pronouncing the tones in individual syllables or even in words, but when they come to actually speak the language or talk in full sentences, things start to fall apart and they start losing control of the tones.

That’s why in Step 4, I want to give you the ‘bigger picture and talk about how the tones ‘work’ in longer sentences, and how to get into the ‘rhythm’ of speaking Chinese.

Here’s my strategy for how to get the Chinese tones right, even in longer sentences

Step 5: Develop good habits in putting the tones into practice and strategies for remembering them

The tones are so important that you need to pay attention to them whenever you speak or listen to Chinese, and you can even reinforce them and test yourself when you read.

It can be challenging to remember the tones of all the words and characters, that’s why you need to make them a central part of your Chinese study and build them into all areas of your learning. You may forget them quite often, but with enough exposure and practice, they will stick!

Here’s my guide to how to fix the tones of characters and words into your head.

How to remember the tones in Chinese, forever